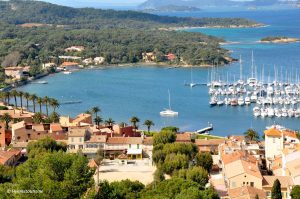 The IGESA Center is located in Porquerolles Island, situated just off France’s Mediterranean coast, between Toulon and Saint-Tropez.

Porquerolles Island is only accessible by boat. It is strongly recommended to use the fastest and cheapest ferries (TLV TVM company), which depart from the port of “Giens -La Tour Fondue”.  Motor vehicles are strictly prohibited on the island.

Attention, the last shuttle leaves at 6 p.m. from The “Tour Fondue”. After, you can use “Taxi boat” but it’s more expensive and you have to book in advance.

How to go to the “Tour Fondue” port:

Hyères airport is about 6km from the “La Tour fondue” port.

Buses (line 67) and taxis are available at the airport.

The train station of Toulon is at 27 km from the “Tour Fondue” port. Take bus line 39 to go to “Hyères Center” and then take bus line 67 until “Tour fondue” station.

The train station of Hyères is at 8 km, to reach the port, you can use bus line 67 until “Tour fondue” Station.