Missions of the SEISM Institut

Inaugurated the 19th of December 2012 in the framework of the Paris-Saclay major project, the SEISM Institute is a scientific interest group created by CEA, EDF, École Centrale Paris, École Normale Supérieure de Cachan and CNRS. The Institute’s mission and ambition are respectively to bring together the expertise of the different partners in seismic risk, and to become a centre of international reference in the field. To this end, the Institute mobilises around fifty researchers, and builds on the experimental method unique in Europe: the installation TAMARIS CEA, as well as on the simulation methods of EDF and other R&D partners.
The SEISM Institute carries out a steering as well as a scientific coordination mission, in accordance with the research lines identified in the roadmap of the Institute, with the following tasks:

To accomplish its steering and scientific coordination mission, in accordance with the research lines identified in the roadmap, the Institute has established the following governance: 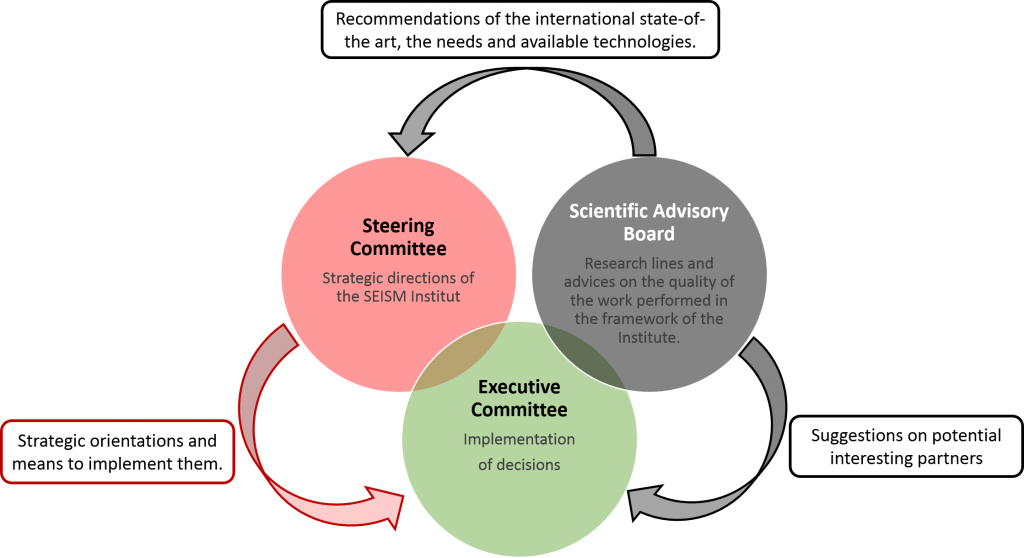 To ensure a strong balance between fundamental research and industrial needs, each member of the Steering Committee has voting rights on the principle of parity between industrials and academics.

Consultative body, the Scientific Advisory Board aims to ensure the relevance of the research lines of the SEISM Institute. Its mission is to provide the Steering Committee any recommendations relating to these research lines, depending on the international state-of-the art, the needs and available technologies. The Scientific Advisory Board also advises the Executive Committee on external partners likely to be associated with the projects. It gives its opinion to the Steering and Executive Committee on the scientific quality of the work realised in the framework of the Institute.

The Scientific Advisory Board is currently composed by the following seven members: